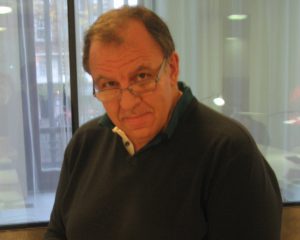 It is with sadness that we record the death of Anthony Cross.  In 2016 Anthony joined our adjunct faculty as PhD supervisor for a number of IBTS students. A well known Baptist historian, Anthony published a wide range of books, book chapters and articles, and he lectured in Britain, Western and Eastern Europe, North America and Asia. A list of some of his extensive publications and biographical information is available here on our website. His contribution in the field of Baptist studies and the success of the students he supervised and supported over many years stand as testament to his dedication to his calling and his remarkable work ethic. Andy Goodliff, friend and colleague of Anthony, has posted a personal tribute, which you can find here.

The International Baptist Theological Seminary has had a special mission within the world Baptist family. Founded initially by Southern Baptists in 1949 in the town of Rüschlikon, Zurich, Switzerland it relocated to Prague 1996. By 1989 ownership of the institution transfered to all the Baptist Unions of Europe and the Middle East in membership of the European Baptist Federation. It has had a special focus and mission within the European Baptist Federation as a postgraduate centre at the heart of a wide network of theological institutions and also co-ordinating a range of conferences relevant to advancing the life and mission of Baptists throughout Europe and the Middle East. Graduates of the institution have and continue to serve in positions of leadership throughout the world.

IBTS Centre Amsterdam carries forward the values, academic excellence and commitment to research and reflection on Baptist and wider issues in the service of the church that characterised the previous incarnations of the institution.

A detailed History of IBTS, before becoming IBTSC Amsterdam, was produced in 2013 by Carol Woodfin and entitled: An Experiment in Christian Internationalism: A History of the European Baptist Theological Seminary and is published by the Baptist History & Heritage Society, 2013, 448 pages.